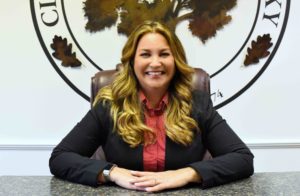 Theresa Jarvis was elected as Mayor of the City of Oak Grove, Kentucky, and began serving on January 1, 2019.  She and her husband, Don, have been residents of Oak Grove for over 26 years, where they raised their three children who attended public schools here.  She was a military spouse and has lived all over the U.S. and in Europe. She previously worked as a code enforcement officer and city clerk for the city.

She has served as a member of Oak Grove Community Cares, Eagle Ambassadors for Ft. Campbell, board member of the Task Force for Economic Development, Board of Education Advisory Committee, Pennyrile Area Development District, Chamber of Commerce, Campbell Strong and was commissioned a Kentucky Colonel.

She is a true champion for the city and an advocate for the residents. You can learn more about her vision and goals for the people of Oak Grove on her Facebook Page.